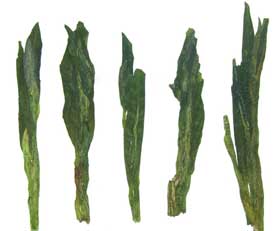 Tai Ping Hou Kui (太平猴魁), litterally Monkey King, is grown near Huang shan around the small village of Hou Keng, Taiping County, Anhui. This tea is often referred as one of China famous teas (depending on list). The best Tai Ping Hou Kui is grown in the villages of Houkeng, Hougang and Yanjiachun. Genuine Tai Ping Hou Kui is hand picked and made from the Shi Da Cha cultivar. Even though this is a big leaf varietal the taste of the tea is mellow.

Tai Ping Hou Kui doesn't undergo any rolling process in contrary to other green teas. It is dried into its natural shape using traditional bamboo baskets.