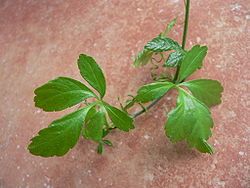 Jiaogulan, with scientific name Gynostemma pentaphyllum, is a climbing vine of the family Cucurbitaceae (cucumber or gourd family) and indigenous to southern China, northern Vietnam, southern Korea and Japan. Jiaogulan is sometimes referred as ginseng of the south because it's like ginseng rich in antioxidants and saponins and purported to increase longevity. Because of it's effect on longlivity it's also called herb of immortality. Pharmacological research has indicated a number of therapeutic qualities of Jiaogulan, such as lowering cholesterol and high blood pressure, strengthening immunity, and inhibiting cancer growth.