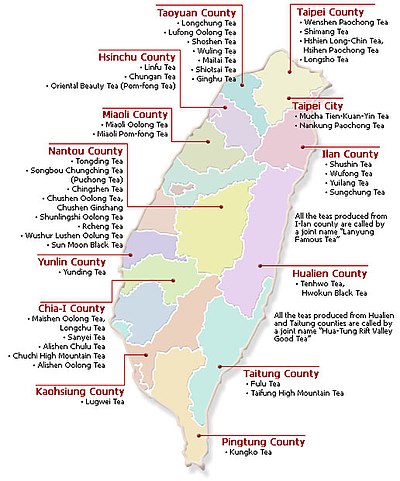 The main tea areas of Taiwan

Taiwan is famous for its tea which are of three main types: oolong, black tea and green tea. The earliest record of tea trees found in Taiwan can be traced back to 1717 in Shi Sha Lien, present-day Yuchih and Puli, Nantou County. Some of the teas retain the island's former name, Formosa. Oolongs grown in Taiwan account for about 20% of world production. 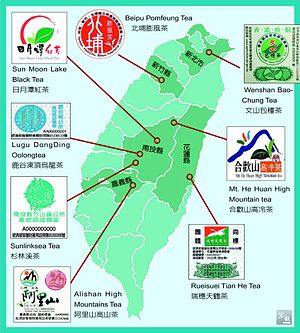 According to Lien Hen (連橫; Taiwanese historian zh:連橫 (人名)), in the late 18th century, Ke Chao (柯朝) brought some tea trees from Fuchien, China Fuchien into Taiwan and planted them in Jie Yu Keng (櫛魚坑), currently known as Ruifang District, New Taipei City. However, transaction records indicated that tea business in Muzha (木柵, Taipei 台北市) area started as early as late 18th century. Thus we can believe that tea has been merchandised in Taiwan for more than two centuries. In 1855, Lin Feng Chi (林鳳池) brought the Cing Shin Oolong(青心烏龍) plants from Wuyi Mountain (Fujien Province, China)(武夷山，福建，中國) into Taiwan and planted in Dongding Village (Lugu, Nantou County, Taiwan)(凍頂鄉，南投，台灣). This is said to be the origin of Dongding Oolong Dong Ding tea from Taiwan.

After the Treaties of Tianjin were ratified in 1860 and the port of Tamsui was opened for trade, British entrepreneur John Dodd began working with tea merchants and farmers to promote Taiwan tea, slowly developing it as an export item. Before long, tea ranked first among Taiwan’s top-three exports, ahead of sugar and camphor. The earliest teas exported during the Ching dynasty were oolong and baozhong tea, which began to be sold abroad in 1865 and 1881, respectively.

In 1867, Dodd started a tea company in Wanhua, Taipei Taipei city(萬華，台北市), and started to sell Taiwanese oolong tea to the world under the name "Formosa Oolong". Aware of British plans to develop a tea industry in India, he successfully sought profit in developing an alternative tea product on the island. Pouchong oolong was considered to be more flowery than Baihao Oolong, Pouchong was exported under the name "Formosa Pouching". In fact, Dongding Oolong (凍頂烏龍茶), White Tip Oolong (白毫烏龍茶) and Pouchong Oolong(包種烏龍茶), Alpine or High Mountain Oolong, are all categorized as Oolong tea, which contributes a large part of Taiwan tea industry. Oolong tea was practically synonymous with Taiwanese tea in the late 19th century, and competitors in Ceylon sought a US market advantage by publishing materials emphasizing the use of human foot trampling during its production. This was countered by the introduction of mechanical processing publicized at the St. Louis Exhibition. Mainland China was subject to trade embargos during the 1950s and 1960s, and during this time Taiwanese tea growers and marketers focused on existing, well-known varieties. After the mainland's products became more widely available and the market for teas became more competitive, the Taiwanese tea industry successfully changed its emphasis to producing specialty versions, especially of Oolongs. A government Tea Inspection Office grades teas into 18 categories ranging from Standard to Choice. 17,384 tonnes of tea were produced in 2008. The government-supported Tea Research and Extension Station, established to promote Taiwanese tea in 1903, conducts research and experimentation.

A tea garden in Ruisui, Hualien

As Taiwan is lucky to have great environment for tea growing, and with the developing of tea technology, Taiwan has produced many top quality teas, all can be called as “Formosa Tea”. The best known ones including "Formosa Dongding oolong", "Formosa Alishan Oolong", "Formosa Wenshan Pouchong","Formosa Oriental Beauty", "Formosa Shanlinxi Oolong", "Formosa Jade Oolong" and more. According to the 1997 version of the Joy of Cooking, Taiwanese oolongs are considered the finest by some tea connoisseurs. The US cooks Julee Rosso and Sheila Lukins describe three Taiwanese oolongs as the "Champagne of tea". Their special quality may be due to unique growing conditions. Oolong is harvested five times per year in Taiwan, between April and December. The July and August crops generally receive the highest grades.

This tea, most notably grown in the mountains of Nantou County, was brought to Taiwan during the 19th century from the mainland's Wuyi Mountains. Its special qualities have been attributed to an almost continuous fog. Teas harvested in the spring are entered in a competition and the winners are quickly bespoken at premium prices, fetching US $2,000 for a 600-gram package during the 1990s. It undergoes less fermentation than most oolongs. A 40-minute roasting over charcoal contributes to its flavor, which also has "nutty, caramel, and chestnut" elements.

Pouchong oolong, also called light oolong, is a lightly fermented tea, twist shape, with floral notes, and usually not roasted, somewhere between green tea and what is usually considered Oolong tea (Chinese: 烏龍; pinyin: Wulong, 'Black Dragon'), though often classified with the latter due to its lack of the sharper green tea flavors. 'Pouchong' refers to its paper wrapping.

White Tip Oolong is very fruity in taste and got the name "Oriental Beauty" from Queen Elizabeth II in the 1960s, thus "Formosa Oolong" became popular in the western world for "Oriental Beauty" (東方美人茶). Along with Lishan Oolong, it was one of the most costly exported Taiwanese teas during the 2000s. Its unique flavor originates in part from the inclusion of insect eggs and egg sacs during harvesting, contributing an element that has been described as "earthier and more robust" than Earl Grey tea. The acceptance of this flavor has led to tolerance of the insects and organic growing practices for this tea.

This variety originated on the mainland, and is associated with a legend in which a tea grower found a unique tea plant near an iron statue of Kuan Yin. Taiwan Mucha Iron Goddess tea (木柵鉄観音), also known as Tie Guanyin, is a traditional oolong. It is roasted and has a stronger taste and a roast nutty character, the tea liquid is reddish-brown. Different from the Anxi Iron Goddess, which is not roasted and green in character.

Also called Alpine oolong, grown in altitudes of 1,000 meters or above.

Grown at altitudes above 2,200 meters, was the costliest Taiwanese tea during the 2000s, commanding prices of over $200 US dollars per 600 grams.

Grown at altitudes above 2,500 meters.

This is the most widely known general name for lightly oxidized oolong tea, much of it picked in winter and therefore termed “Winter tea”. Among the oolongs grown on Ali Mountain, tea merchants tend to stress the special qualities of Jin Xuan oolong( 金萱). The oolong tea made with it has a particularly deep flavor.

An oolong scented with osmanthus flowers, the tea is also packaged with some flowers added after the scenting process. This tea is roasted, with floral and warming notes.

TTES #1-11, TTES #18 and #21 are cultivars developed by the Taiwan Tea Research and Experiment Station particularly for black tea. Most of them are hybrids of native tea trees and a assamica varietal.