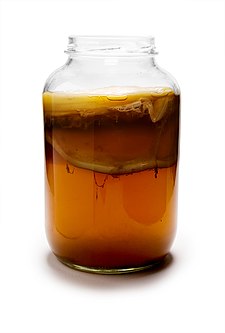 Kombucha including the culture

Kombucha is an effervescent fermentation of sweetened tea that is used as a functional food.

Sometimes referred to as a "mushroom" or "mother", the kombucha culture is actually a symbiotic colony of bacteria and yeast (SCOBY). 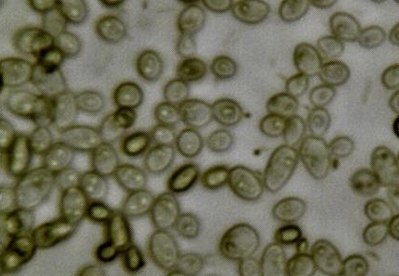 Yeast and bacteria in kombucha at 400X

The kombucha culture is a symbiotic culture of bacteria and yeast, comprising Acetobacter (a genus of acetic acid bacteria) and one or more yeasts. These form a zoogleal mat. In Chinese language|Chinese, this microbial culture is called haomo, or jiaomu in Mandarin, (酵母).

Although the bacterial component of a kombucha culture comprises several species, it almost always includes Gluconacetobacter xylinus (formerly Acetobacter xylinum), which ferments the alcohols produced by the yeast(s) into acetic acid. This increases the acidity while limiting the alcoholic content of kombucha. G. xylinum is responsible for most or all of the physical structure of a kombucha mother, and has been shown to produce microbial cellulose. This is likely due to artificial selection by brewers over time, selecting for firmer and more robust cultures.

The acidity and mild alcoholic element of kombucha resists contamination by most airborne molds or bacterial spores. As a result, kombucha is relatively easy to maintain as a culture outside of sterile conditions. The bacteria and yeasts in kombucha may also produce antimicrobial defense molecules.

The kombucha culture can also be used to make an artificial leather.

The English word wikt:kombucha|kombucha, which was first recorded in 1995, has an uncertain etymology.[1] The American Heritage Dictionary suggests: "Probably from Japanese kombucha, tea made from kombu (the Japanese word perhaps being used by English speakers to designate fermented tea due to confusion or because the thick gelatinous film produced by the kombucha culture was thought to resemble seaweed)."[2]

It was brought to Russia sometime before 1910 and spread from there to Germany and Europe.

Some promotional kombucha sources suggest the history of this tea-based beverage originated in ancient China or Japan, though no written records support these assumptions (see history of tea in China and history of tea in Japan). One author reported kombucha, supposedly known as the "Godly Tsche [i.e., tea]" during the Chinese Qin Dynasty (221-206 BCE), was "a beverage with magical powers enabling people to live forever".

Kombucha contains multiple species of yeast and bacteria along with the organic acids, active enzymes, amino acids, and polyphenols produced by these microbes. The precise quantities of a sample can only be determined by laboratory analysis. Finished kombucha may contain any of the following components:

Normally, kombucha contains less than 0.5% ethanol, which classifies it as a nonalcoholic beverage.Template:Citation needed Older, more acidic, kombucha might contain 1.0% or 1.5% alcohol, depending on more anaerobic brewing time and higher proportions of sugar and yeast.

Kombucha producers often claim that kombucha 'detoxifies the body and energizes the mind', although little research of its health benefits has been published.

A review of the published literature on the safety of kombucha suggests no specific oral toxicity in laboratory animals. While no randomized, case-controlled studies have been published in relation to its effect on humans, there has been suspicion in isolated incidents of its effect on the central nervous system, liver, metabolic acidosis, and toxicity in general, though no specific links have been established. Acute conditions, such as lactic acidosis, caused by drinking of kombucha, are more likely to occur in persons with pre-existing medical conditions. Other reports suggest care should be taken when taking medical drugs or hormone replacement therapy while regularly drinking kombucha.> It may also cause allergy|allergic reactions.

However, a more recent and thorough analysis of a variety of commercial and homebrew versions of kombucha found no evidence of glucuronic acid. Instead, the active component is most likely glucaric acid. This compound, also known as D-glucaro-1,4-lactone, helps eliminate the glucuronic acid conjugates produced by the liver. When these conjugates are excreted, normal gut bacteria can break them up using a bacterial form of the enzyme beta-glucuronidase. Glucaric acid is an inhibitor of this bacterial enzyme, so the waste stored in the glucuronic acid conjugates is properly eliminated the first time, rather than being reabsorbed and detoxified over and over. Thus, glucaric acid probably makes the liver more efficient.

Glucaric acid is commonly found in fruits and vegetables, and is being explored independently as a cancer-preventive agent. The bacterial enzyme beta-glucuronidase can interfere with proper disposal of a chemotherapeutic agent, and antibiotics against gut bacteria can prevent toxicity of some chemotherapy drugs, supporting the idea that glucaric acid is an active component of kombucha.

Reports of adverse reactions may be related to unsanitary fermentation conditions, leaching of compounds from the fermentation vessels, or "sickly" kombucha cultures that cannot acidify the brew. Cleanliness is important during preparation, and in most cases, the acidity of the fermented drink prevents growth of unwanted contaminants.

Some evidence from small case studies has shown kombucha to aggravate symptoms of ulcerative colitis in patients taking remicade, potentially causing life-threatening side effects, such as causing the Vermiform appendix|appendix to burst.

Other health claims may be due to the simple acidity of the drink, possibly influencing the production of stomach acids or modifying the communities of microorganisms in the gastrointestinal tract.

Several firms market kombucha capsules and tea bags purportedly containing some form of dried kombucha. No evidence supports any health benefits to such products.Template:Citation needed The addition of boiling water to dried kombucha in teabag form is likely to kill any remaining live culture. Another suspect product being marketed is Kombucha extract. Most such extracts are no more than small amounts of kombucha tea that has turned vinegary.

Some firms market their kombucha mushroom cultures based on their size, charging more for larger cultures. The size of a mushroom culture does not really matter; smaller ones will ferment a new batch of prepared tea just as well as larger ones.

As with all foods, care must be taken during preparation and storage to prevent contamination. Keeping the kombucha brew safe and contamination-free is a concern to many home brewers. Key components of food safety when brewing kombucha include clean environment, proper temperature, and low pH. If a culture becomes contaminated, it will most likely be identifiable as Mold#Common molds|common mold which is often green, blue, or black in color. Often novice brewers will mistake the brownish root filaments on the underside of the culture as a mold contamination when it is seen through the surface of a thinly formed culture. If mold does grow on the surface of the kombucha culture, or "mushroom", it is best to throw out both culture and tea and start again with a fresh kombucha culture.

Mold tends to grow especially when the kombucha mushroom is lifted out of the liquid by its own gases. Keeping it covered with liquid in the later stages, i.e. when the new kombucha mushroom starts growing, can successfully prevent mold from growing.

The low rate of contamination by the home brewer might be explained by protective mechanisms, such as formation of organic acids and antibiotic substances. Thus, subjects with healthy metabolisms are appropriate for cultivating kombucha tea cultures to drink the product tea. However, those suffering from immunosuppression should preferably consume controlled commercial kombucha beverages.

In every step of the preparation process, it is important that hands and utensils (or anything that will to come into contact with the culture) be well cleaned to prevent contamination of the kombucha. Also, kombucha becomes very acidic (approximately pH 3.0 when finished), so it can leach unwanted and potentially toxic materials from containers in which it is fermenting if they are not food-grade. Keeping cultures covered and in clean environments also reduces the risk of introducing contaminants and insects.

Maintaining a correct pH is an important factor in a home brew. Acidic conditions are favorable for the growth of the kombucha culture, and inhibit the growth of molds and bacteria. The pH of the kombucha batch should be between 2.5 and 4.6. A pH of less than 2.5 makes the drink too acidic for normal human consumption, while a pH greater than 4.6 increases the risk of contamination. Use of fresh "starter tea" and/or distilled vinegar can be used to control pH. Some brewers test the pH at the beginning and the end of the brewing cycle to ensure the correct pH is achieved and the brewing cycle is complete.

Kombucha is typically produced by placing a culture in a sweetened tea, as sugars are necessary for fermentation. Black tea is a popular choice, but green tea, white tea and yerba mate may also be used. Herbal teas or those treated with oils may harm the kombucha culture over time.

A standard kombucha recipe calls for one cup of sugar per gallon of water or tea, though some variation in the ratio is tolerated by the culture. Kombucha may be fermented with many different sugar sources, including refined white sugar, evaporated cane juice, brown sugar, glucose/fructose syrups, molasses and honey (pasteurized only). High concentration of honey and its bacteriostatic agents may potentially disturb the stability of the culture. Kombucha should never be fermented with stevia, xylitol, lactose, or any artificial sweetener.

The container is often covered with a closed-weave cloth to prevent contamination by dust, mold, and other bacteria, while allowing gas transfer ("breathing"). A "baby" SCOBY is produced on the liquid/gas interface during each fermentation. The surface area is the most favorable location for both aerobic bacteria on the top of the new "pancake" and anaerobic bacteria on the bottom. The surface area also has ideal concentration of oxygen for the yeast in the matrix to propagate readily.

After a week or two of fermentation, the liquid is tapped. Some liquid is retained for the subsequent batch to keep the pH low to prevent contamination. This process can be repeated indefinitely. In each batch, the "mother" culture will produce a "baby", which can be directly handled, separated like two pancakes, and moved to another container. The yeast in the tapped liquid will continue to survive. A secondary fermentation may be accomplished by removing the liquid to a closed container (bottle) for about a week to produce more carbonation. Care should be taken, as carbon dioxide build up can cause bottles to explode.

Left entirely alone to ferment with oxygen, the kombucha settles into months of production time (the "baby" thickening considerably), creating an ever more acidic and vinegar-flavored cider. At any point the kombucha can be tapped or have tea added. Liquid from the previous batch will preserve some of the culture.