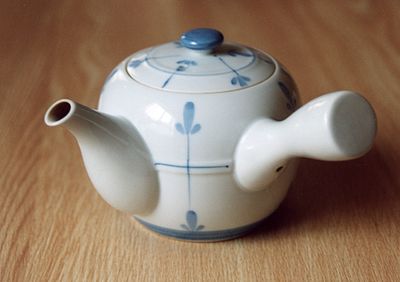 Kyusu (also: kyūsu, 急須) are Japanese teapots used for brewing tea. The word "kyusu" in Japanese refers to any teapot, with a common misconception that all kyusu pots possess a side handle, which is technically the yokode kyusu. The misconception is exacerbated in light of modern parlance where "kyusu" usually refers to the side-handled yokode kyusu variety of Japanese kyusu. Kyusu teapots are generally used for brewing green tea in particular, while other varieties of tea such as black and Kyusu can also be brewed depending on the variety of kyusu used and the material used to make the teapot.

The origins of the kyusu Japanese teapots are believed to have originated in China, where teaware and tea culture mainly originated. Chinese tea culture began to take root in Japan following the many diplomatic missions launched from Japan to first the Sui dynasty of China beginning in 607 CE and continuously into the reign of the Tang dynasty up until the year 839 CE.

Multiple other diplomatic missions would take place between the last mission to Tang China in the year 839 up into the reign of the Qing dynasty. Each successive mission would bring back information and practices that would then be interpreted and adapted into Japanese aristocratic and eventually wider culture over time.

Tangible and intangible goods pertaining to general Chinese culture, science, technology, different schools of Buddhism, tea culture and wares were all brought back to Japan throughout the years of these various missions. The initial teawares introduced to Japan from China and Korea were developed and modified by Japanese potters and artisans with some of the first Japanese teaware kilns being used as early as 1100 CE.

During the reign of the Ming dynasty (1368-1644 CE) in China, the Yixing style of teaware along with the method of steaming green tea leaves, known today in Japan as "sencha" were both introduced to Japan. The introduction of sencha has been credited to the Chinese monk Ingen, who is also credited with founding the Obaku school of Zen Buddhism in Japan. The introduction of the Yixing style of teapot, as well as the method of preparing steamed tea, leaves also led to further innovation of the native Japanese kyusu style teapots. Over time the various regional styles, shapes and crafting mediums used to create kyusu began to take on their more modern forms.

Six main production areas in Japan are credited with producing some of the first iterations of the native Japanese kyusu. Each area centers around a historical kiln that may have been in use to produce ceramic, clay and/or earthenware far before producing teaware specifically.

Arita Yaki is located in Saga Prefecture. Ceramic teaware items with a glossy yet durable consistency are some of the items of particular note from this region.

Tokoname Yaki is located in Aichi Prefecture. This area is said to have begun producing ceramics and clayware as early as the 8th or 9th century CE during Japan's Heian era. Tokoname is one of the oldest kilns in Japan. This area specializes in producing red clay kyusu. Some of the smaller kyusu pots from Tokonome feature lids that do not fall off due to water adhesion keeping the lid fastened. Another interesting feature of some of the Tokoname Yaki teapots is a special spout crafted at an angle. The special angle allows these items to pour without leaking. Tokoname ware is one of the largest production areas in Japan for teaware and tableware as well as the "manekineko" or "lucky-waving-cat" statuettes popular in Japan and abroad.

Mumyoi Yaki is located in Niigata Prefecture. The kiln in this area is further located on Sado island, this kiln specializes in red clay teaware items and kyusu. The clay from Sado island is rich in minerals and traditionally the clay used in the teaware is collected from the island's gold mine.

Many of the traditional production areas are located along the Japan Median Tectonic Line (JMTL) and the Itoigawa-Shizuoka Tectonic Line (ISTL). The volcanic activity along these faultlines contributes to clay deposits that are rich in minerals. This makes the clay from this area sought after in order to emulate the zisha purple sand ceramic found in China. Using clay similar to zisha clay in composition and appearance also further allows kyusu to emulate the Chinese Yixing style pots which many kyusu are modeled after.

Today kyusu come in all manner of colors, shapes, styles, and motifs. Glazed and unglazed clay pots in the style of Yixing, as well as ceramic pots, earthenware and cast iron, can be found among the kyusu category of teapots. Many kyusu are still produced on rotating potter's wheels.

The interior of kyusu pots contain either stainless steel or ceramic mesh. Stainless steel mesh are usually fitted into the pot itself and are ideal for smaller leaf or powdered teas. The ceramic mesh is generally used with larger whole leaf tea or tea bags.

In more common parlance generally referred to as simply "kyusu", the yokode kyusu features a cylindrical side handle. The side handle allows one to tip and pour the pot while holding the lid on top. This variety is often used to pour solo cups of tea for oneself, but can certainly be used for multiple people as well.

The Ushirode/Atode kyusu features a handle on the back of the teapot similar to many standard teapots in other parts of the world. This teapot requires one to use both hands to pour. This style of teapot is said to have been based on the "chafu" style of pottery which traces its origins to China.

Teapots featuring handles that loops over the top of the body of the teapot. The overarching handle was originally used to hang pots, like the early versions of the cast iron tetsubin pots, over an active source of heat like a hibachi, furnace or fireplace. These pots were communal for the family and today are generally larger in comparison to other varieties of kyusu and can serve more individuals.

Hohin style pots feature no handles and are based on the Chinese gaiwan variety of teapot-cups that gained popularity during the Ming dynasty. As there are no handles, hohin pots are generally only used to brew teas that require milder brewing temperatures such as white tea or gyokuro green tea. Some hohin are even outfitted with a spout or lip for pouring the steeped tea into an additional cup.

As a common household item in Japan, kyusu can be seen in use or as background objects in Japanese media ranging from manga to anime to films.

Folktales from the Edo era such as Bunbuku Chagama (分福茶釜/ 文福茶釜/ The lucky tea kettle) feature tanuki/raccoon-dog, badger or fox spirits taking on the form of teapots and tea kettles and performing miraculous and incredulous tasks and deeds for their owners, usually of the benevolent and entertaining nature.