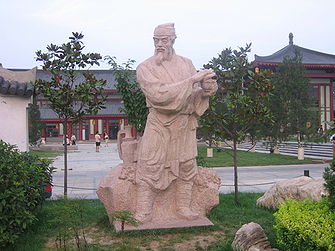 A statue of Lu Yu located in Xi'an

Lu Yu (陆羽 / 陸羽) (733–804) is respected as the Sage of Tea for his contribution to Chinese tea culture. He is best known for his monumental book The Classic of Tea (茶经), the first definitive work on cultivating, making and drinking tea.

Lu was born 733 in Tianmen town, Hubei province. At age of three years he was abandoned near the Longgai monastery and was adopted by the abbot of the monastery. The abbot was knowledgeable in the culture of tea and taught Lu Yu all the secrets of the art of tea. Beside the art of tea Lu Yu also learned calligraphy, literature and Buddhist scriptures. Despite being raised in a monastery, he did not become a monk but a passionate scholar.

Later, Lu Yu stayed for six years in Houmen mountain and studied under the guidance of master Zou Fuzi. During this period Lu Yu often brewed tea for his teacher took care of fellow students' health with his remarkable knowledge in tea and herbs that he learned while at the Longgai Monastery.

Between his studies Lu Yu often went to the countryside in order to gather tea leaves and herbs. In one of those trips Lu Yu stumbled upon a spring underneath a 6-foot round rock. The water from this spring was extremely clear and clean and Lu Yu used this water to brew tea. The tea brewed of this water tasted much better than usual. Lu Yu realized then how important the quality water for brewing tea is.

Zou Fuzi was impressed by Lu Yu's obsession and skills with tea and his skill in brewing good tea. As a tribute to Lu Yu he cleared the rock together with some of his students and dug a well around that spring. In 1768, just over a thousand years later during the Qing Dynasty (1616–1911), Jingling was hit by drought and the whole city was badly in need of water. City folks found water still flowing from this well uncovered by Lu Yu and dug by Zou Fuzi. A Qing official ordered three wells to be dug around the spring, and a structure constructed near the wells named "Lu Yu Hut" and the "Literary Spring".

In 752 Lu Yu concluded his studies, bade farewell to his guru Zou Fuzi and returned to Jingling to meet his benefactor Li Qiwu. However a year earlier Li Qiwu was reinstated and returned to the Tang capital Chang'an. The new Chief Official of Jingling now was Cui Goufu. Cui a senior official who was holding a position similar to an Education Minister of today was demoted to Jingling as a Chief Official for offending a member of the royalty.

Cui Goufu was a scholar and poet well known for his magnificent 5 characters per verse short poem. After his demotion to Jingling Cui Goufu took life fairly easy. Even though Cui was many years older than Lu Yu, both men shared the same interest in tea, literature and poetry. As such they became good friends soon after they met. During this period Lu Yu stayed with Cui Goufu and assisted him in his administrative tasks. The two of a kind spent much time traveling, drinking tea and writing poems and they co-authored several books on poems.

This period with Cui Goufu was the growing phase for Lu Yu as a man of letters; an incubation period for Lu Yu to practice and sharpen what he learned from his mentor Zou Fuzi. Cui Goufu with his vast experience and skill in literary work became a coach that provided the necessary guidance to enhance and mature Lu Yu's writing and literary skills. During this time he wrote The Classic of Tea.