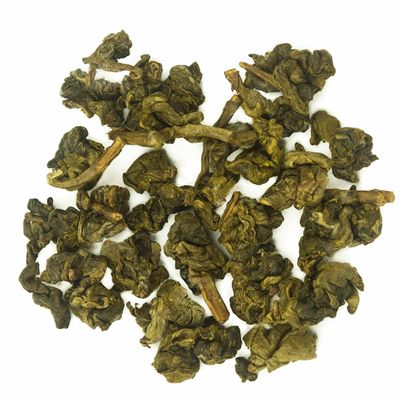 Oolong, sometimes written as wu long or wulong is a traditional Chinese tea (Camellia sinensis) produced through a unique process including withering under the sun and oxidation before curling and twisting. Most oolong teas, especially those of fine quality, involve unique tea plant cultivars that are exclusively used for particular varieties [1]. The degree of oxidation can range from 8% - 80% depending on the variety and production style. This tea category is especially popular with tea connoisseurs of south China and Chinese expatriates in Southeast Asia, as is the tea preparation process that originated from this area: gongfu tea-making, or the gongfu tea infusion approach.

In Chinese tea culture, semi-oxidised oolong teas are collectively grouped as qīngchá. The taste of oolong ranges hugely amongst various subvarieties [2]. It can be sweet and fruity with honey aromas or woody and thick with roasted aromas [3], or green and fresh with bouquet aromas, all depending on the horticulture and style of production. Several subvarieties of oolong, including those produced in the Wuyi Mountains of northern Fujian, such as Da Hong Pao, are among the most famous Chinese teas.

Different varieties of oolong are processed differently, but the leaves are formed into one of two distinct styles. Some are rolled into long curly leaves, while others are 'wrap-curled' into small beads, each with a tail. The former style is the more traditional of the two.

The name oolong tea came into the English language from the Chinese name (烏龍茶), meaning "black dragon tea". Other possible descriptions are "blue tea" (from Qing Cha) or "semi-fermented tea" (although it's oxidized and not fermented). 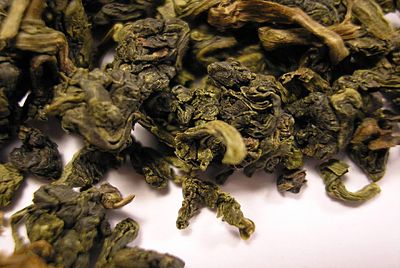 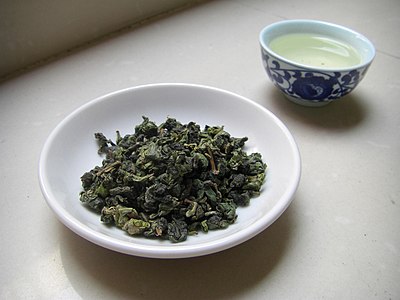 The most famous and expensive oolong teas are made here, and the production is still usually accredited as being organic. Much Shui Xian is grown elsewhere in Fujian. Some of the better known cliff teas are:

Iron Goddess Guanyin Tie Guan Yin or Ti Kuan Yin (鐵觀音)
in Chinese, this is a tea from Anxi in South Fujian. It is very famous as a 'Chinese famous tea' and very popular.

or Golden Osmanthus is another tea from the Anxi area of Fujian Province. It resembles Tie Guan Yin with a very fragrant flavor.

There is a story regarding the origin of the Tie Guan Yin variety: There was once a poor farmer who was devout and dedicated to maintaining the temple of Kuan Yin, the goddess of mercy. One day, to reward him for his loyalty and commitment to her, she told him that the key to his future was outside the temple. Outside he found a scrungy old bush, which he nursed to a flourishing bloom of greenish leaves.

Single Bush Dan Cong (单枞)
A family of stripe-style oolong teas from Guangdong Province. The doppelganger of teas, Dancong teas are noted for their ability to naturally imitate the flavors and fragrances of various flowers and fruits, such as orange blossom, orchid, grapefruit, almond, ginger flower, etc.

The name Dan Cong is often misinterpreted as meaning the tea is all picked from a single bush, grove, or clone. This is not correct. Dan cong is a botanical term that refers to the morphology of the tea plant. Most tea bushes emerge from the ground as a cluster of branches; however, the uncommon Dan Cong variety emerges as a single trunk that branches off higher up the stem.

Tea cultivation began in Taiwan in the mid-19th century. Many of the teas which are grown in Fujian province have also been grown in Taiwan. Due to high domestic demand and a strong tea culture, most Taiwanese tea is bought and consumed by locals.

As the weather in Taiwan is highly variable, tea quality may differ from season to season. Although the island is not particularly large, it is geographically varied, with high, steep mountains rising abruptly from low-lying coastal plains. The different weather patterns, temperatures, altitudes, and soil ultimately result in differences in appearance, aroma, and flavour of the tea grown in Taiwan. In some mountainous areas, teas have been cultivated at ever higher elevations to produce a unique sweet taste that fetches a premium price.

Dong Ding oolong, (凍頂)
The name means Frozen Summit or Ice Peak. Dong Ding is a mountain in Nantou County, Central Taiwan. This is a tightly rolled tea with a light, distinctive fragrance.

Alishan oolong, (阿里山茶)
Grown in the Alishan area of Chiayi County, this tea has large rolled leaves that have a purple-green appearance when dry. It is grown at an elevation of 1,000 to 1,400 meters. There is only a short growing period during the summer when the sun is strong enough, which results in a sweeter and less astringent brew. It produces a golden yellow tea which has a unique fruity aroma.

Lishan oolong, (梨山)
Grown in the north-central region of Taiwan, this tea is very similar in appearance to Alishan teas, and is often considered to be one of the best teas from Taiwan. It is grown at an elevation above 1,000 metres, with Dayuling, Lishan, and Fusou being the best known regions and teas of Lishan.

Pouchong, (包種茶)
Also romanized as Baozhong, the lightest and most floral oolong, with unrolled leaves of a light green to brown color. Originally grown in Fujian it is now widely cultivated and produced in Pinglin Township near Taipei, Taiwan.

Ruan Zhi, (軟枝)
This is a light variety of oolong tea. The tea is also known as Bai Lu and as TTES #17. It's a new developed hybrid from Taiwan.

Generally, 3 grams of tea per 200 ml of water, or about two teaspoons of oolong tea per cup, should be used. Oolong teas should be prepared with 85 to 95C water (not boiling) and steeped 3–10 minutes. High quality oolong can be steeped several times from the same leaves and, unlike other teas, it improves with rebrewing: it is common to steep the same leaves three to five times, the third or fourth steeping usually being considered the best.

A widely used ceremonial method of steeping oolongs in Taiwan and China is called gongfucha. This method uses a small steeping vessel, such as a gaiwan or Yixing clay teapot, with more tea than usual for the amount of water used. Multiple short steeps of 20 seconds to 1 minute are performed; the tea is often served in one- to two-ounce tasting cups.

Though the caffeine content in a given brew of tea may vary based on the brewing method, variety of tea, and number of extractions, Oolong tea in general contains caffeine, albeit less than black tea.