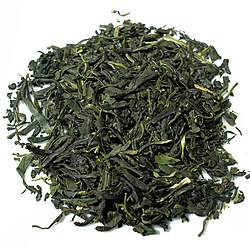 Tamaryokucha (玉緑茶) is a Japanese green tea from Kyushu. It distinguish from Sencha in look and taste due to different production methode. It's also known as Guricha (curly tea).

Tamaryokucha is only produced in Kyushu around Ureshino in Saga prefecture. In all other areas is mostly Sencha produced.

Tamaryokucha has a curley look and is often produced using the Chinese method. The Chinese technique involves iron pans for roasting the tea in order to prevent oxidation (kill green). This version of Tamaryokucha is also called Kamairicha. Kama the iron pan used for roasting.