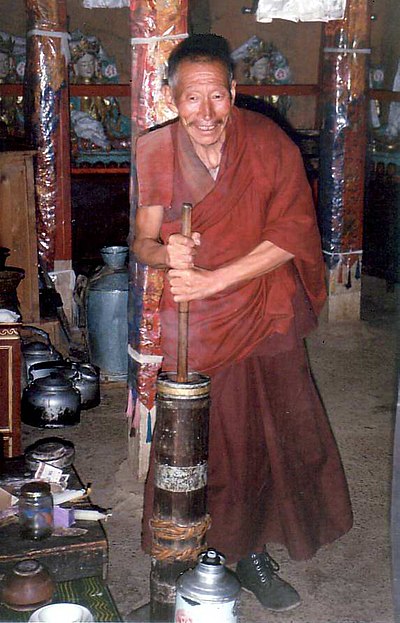 Butter tea, also known as po cha ("Tibetan tea"), cha süma ( "churned tea"), Chinese language: sūyóu chá (酥油茶) or goor goor in local Ladakhi terms, is a drink of the Tibetans and Chinese minorities in southwestern China. It is also consumed in Bhutan. It is made from tea leaves, yak butter, and salt.

Drinking butter tea is a regular part of Tibetan life. Before work, a Tibetan will typically down several bowlfuls of this beverage, and it is always served to guests. Nomads are said to often drink up to 40 cups of it a day. Since butter is the main ingredient, butter tea is a very warming drink, providing lots of calories energy and is particularly suited to high altitudes. The butter also helps prevent chapped lips.

While evidence of tea has been found in Tibet from before the 10th century, it did not reach its nearly universal status until about the 13th century, the time of the Sakya hierarchy and the Phagmodu kings. By the start of the rule by the Dalai Lama, tea had become a government monopoly. While it is now officially allowed to be sold by anyone, it still is mostly sold by government officials.

The highest quality tea is made by boiling the tea leaves in water for half a day, achieving a dark brown color. It is then skimmed, and poured into a cylinder with fresh yak butter and salt which is then shaken. The result is a purplish liquid that is about the thickness of a stew or thick oil. It is then poured into clay tea-pots, or jars, that resemble Japanese teapots.

Another method is to boil water, and add handfuls of the tea into the water, which is allowed to steep until it turns almost black. Salt is then added, along with a little soda if wanted. The tea is then strained through a horse-hair or reed colander into a wooden butter churn, and a large lump of butter is added. This is then churned until the tea reaches the proper consistency and transferred to copper pots that sit on a brazier to keep them warm. When a churn is not available, a wooden bowl and rapid stirring will suffice.