Camellia sinensis is the species of plant whose leaves and leaf buds are used to produce the popular beverage tea.

It is of the genus Camellia a genus of flowering plants in the family Theaceae. White tea, green tea, oolong, pu-erh tea and black tea are all harvested from this species, but are processed differently to attain different levels of oxidation. Kukicha is also harvested from Camellia sinensis, but uses twigs and stems rather than leaves. Common names include tea plant, tea shrub, and tea tree (not to be confused with Melaleuca alternifolia, the source of tea tree oil).

The name Camellia is taken from the Latinized name of Rev. Georg Joseph Kamelref, Society of Jesus (1661–1706), a Czech-born Jesuit lay brother, pharmacist, and missionary to the Philippines. Carl Linnaeus chose his name in 1753 for the genus to honor Kamel's contributions to botany (although Kamel did not discover or name this plant, or any Camellia and Linnaeus did not consider this plant a Camellia but a Thea. Robert Sweet /code/tokyo-e/Art_13.htm | quote = The generic names Thea L. (Sp. Pl.: 515. 24 Mai 1753), and Camellia L. The name sinensis means from China in Latin.

Camellia sinensis is native to East, South and Southeast Asia, but it is today cultivated across the world in tropical and subtropical regions. It is an evergreen shrub or small tree that is usually trimmed to below Template:Convert when cultivated for its leaves. It has a strong taproot. The flowers are yellow-white, Template:Convert in diameter, with 7 to 8 petals.

The seeds of Camellia sinensis and Camellia oleifera can be pressed to yield tea oil, a sweetish seasoning and cooking oil that should not be confused with tea tree oil, an essential oil that is used for medical and cosmetic purposes, and originates from the leaves of a different plant. 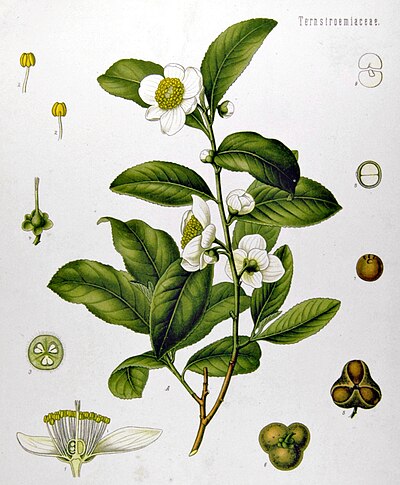 The leaves are Template:Convert long and Template:Convert broad. Fresh leaves contain about 4% caffeine.[1] The young, light green leaves are preferably harvested for tea production; they have short white hairs on the underside. Older leaves are deeper green. Different leaf ages produce differing tea qualities, since their chemical compositions are different. Usually, the tip (bud) and the first two to three leaves are harvested for processing. This hand picking is repeated every one to two weeks.

Camellia sinensis is mainly cultivated in tropical and subtropical climates, in areas with at least 127 cm. (50 inches) of rainfall a year. However, the clonal one is commercially cultivated from the equator to as far north as Cornwall on the UK mainland.[2] Many high quality teas are grown at high elevations, up to 1500 meters (5,000 ft), as the plants grow more slowly and acquire more flavour.[3]

There are three main kinds of tea produced in India:

Assam tea comes from the northeastern section of the country. This heavily forested region is home to much wildlife, including the rhinoceros. Tea from here is rich and full-bodied. It was in Assam that the first tea estate was established, in 1837.

Darjeeling – the Darjeeling region is cool and wet, and tucked in the foothills of the Himalayas. The tea is delicately flavored, and considered to be one of the finest teas in the world. The Darjeeling plantations have 3 distinct harvests, termed 'flushes', and the tea produced from each flush has a unique flavor. First (spring) flush teas are light and aromatic, while the second (summer) flush produces tea with a bit more bite. The third, or autumn flush gives a tea that is lesser in quality.

Nilgiri tea comes from an even higher part of India than Darjeeling. This southern Indian region has elevations between 1,000 and 2,500 metres. The flavors of Nilgiri teas are subtle and rather gentle. They are frequently blended with other, more robust teas. 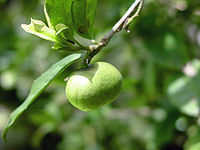 The Chinese plant (sometimes called C. sinensis var. sinensis) is a small-leaved bush with multiple stems that reaches a height of some 3 meters. It is native to southeast China. The first tea plant to be discovered, recorded and used to produce tea three thousand years ago, it yields some of the most popular teas.

C. sinensis var. waldenae was considered a different species, Camellia waldenae by SY Hu,[4] but it was later identified as a variety of C. sinensis.[5] This variety is commonly called Waldenae Camellia. It is seen on Sunset Peak and Tai Mo Shan in Hong Kong. It is also distributed in Guangxi Province, China.[4]

Template:Main Template:See also Tea leaves are eaten by some herbivores, like the caterpillars of the willow beauty (Peribatodes rhomboidaria), a geometer moth.

Caffeine has been localized to the vascular bundles of C. sinensis leaves using immunohistochemical methods and confocal scanning laser microscopy. The precursor phloem was suggested to be the main area of accumulation but caffeine was determined to be present within the precursor xylem. It was hypothesized that caffeine is synthesized within the chloroplasts of photosynthetic cells and transported to the vascular bundles where it acts as a chemical defense against various pathogens and predators. [6]

Template:Main The leaves have been used in traditional Chinese medicine and other medical systems to treat asthma (functioning as a bronchodilator), angina pectoris, peripheral vascular disease, and coronary artery disease.

Recent medical research on tea (most of which has been on green tea) has revealed various health benefits, including anti-cancer potential, effects on cholesterol levels, antibacterial properties and positive effects for weight loss.[7] It is considered to have many positive health benefits due to tea's high levels of catechins, a type of antioxidant.

However, tea may have some negative impacts on health, such as over-consumption of caffeine, and the presence of flouride and oxalates in tea.