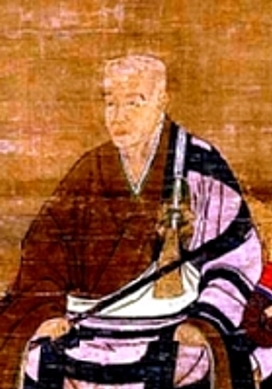 Myoan Eisai (明菴栄西), eventually spelled "Yosai" back then, (born May 27, 1141 CE-died July 2, 1215 CE) was a Japanese Buddhist priest. Also known as Eisai Zenji or Yosai Zenji (栄西禅師/Zen Master Eisai), he is remembered for introducing the Linji (Japanese: Rinzai) school of Zen to Japan from China. He is also credited with the further development of tea culture and consumption in Japan, having introduced tea seeds to Japan and also writing a medical treatise on tea's health benefits.

Eisai was born in 1141 in what is today Okayama Province in Japan. His father was a Shinto priest. At the age of eleven, he began studying Tendai Buddhism at Anyouji Temple. Tendai Buddhism was introduced to Japan by another monk associated with tea culture in Japan, Saicho.

Tendai Buddhism is the Japanese rendering of the Chinese name "Tiantai". The Tiantai school was founded in China at Mount Tiantai. It is a school of Buddhism that utilizes various rituals and esoteric beliefs and practices. This Chinese school of Buddhism was introduced by Saicho along with the first tea seeds in 805 CE.

Later, Eisai was ordained at Mount Hiei near Kyoto at age 14 in the Tendai sect. In 1168, Eisai traveled to Mount Tiantai in China. This was the original founding place of his sect of Buddhism. Eisai would later return to China again with the goal of reaching India. Eisai often focused his attention on returning to the purer roots of his respective belief systems. However, the Chinese government would not grant him a border crossing and so he chose to study in China further in lieu of visiting India, Buddhism's place of origin.

During his time in China on his initial visit, Eisai learned of the ascendant Chan (Japanese: Zen) school of Buddhism. Eisai eventually would become a disciple of a master in the Linji (Japanese: Rinzai) sect of Chan Buddhism.

Chan is a school of Buddhism that utilizes meditation and focusing of attention and awareness on the breath. by focusing attention on the breath one can see through the illusory nature of the self and attain enlightenment. In some iterations of older Chan, the ripping and tearing of sutras and holy texts would serve as a radical method of waking up and attaining enlightenment outside the confines of textual and doctrinal understanding and orthodox protocols at the time.

When he returned to Japan in 1191, he established the temple of Hoon in Kyushu. It was the first Zen temple in Japan. Eisai also brought Zen scriptures and tea seeds along with him from China. The first seeds Eisai planted were at Mount Sefuri. Mount Sefuri is located on the Saga and Fukuoka border. Eisai chose to plant the seeds at Mount Sefuri due to the area's resemblance to Mount Tiantai.

Eisai would continue to propagate the new Zen faith in Japan. He would initially utilize careful and measured diplomacy with the older and more established schools of Buddhism already in Japan and the secular leadership and government.

It was with the samurai class and the shogun that Eisai became ingratiated, further developing a relationship between Zen Buddhism, tea and the samurai class. Eisai's Kozen Gokokuron (the Promotion of Zen for the Protection of the Country/ 興禅護国論) became an influential work especially amongst the military ruling class of Eisai's time.

In the Kozen Gokokuron, Eisai describes, amongst other concepts, the importance of Zen Buddhism for unifying and facilitating a functional society and government.

The credit of starting tea culture in Japan is often given to Eisai. Eisai first brought tea seeds from China to Japan, and also wrote the seminal book, Kissa Yojoki (Drinking Tea for Health/喫茶養生記). This work by Eisai was first intended as a medical treatise on the medicinal properties of tea.

Using the Traditional Chinese Element theory to inform his writing Eisai developed a text outlining the many health-enhancing and promoting effects of tea. The Chinese Five Element theory includes the belief that the five Chinese elements of water, fire, earth, wood, and metal all correspond to different organs in the body; the liver, heart, lungs, kidney, and spleen.

Each organ was kept healthy and balanced by its respective tastes of acidic, bitter, sweet, pungent, and salty. According to Eisai, the Japanese diet provided a healthy balance of all of the aforementioned with the exception of the bitter flavor.

In addition to being a dietary supplement, Eisai believed tea could also be used medicinally to treat various diseases. During this period in Japanese history, there was constant political upheaval and strife with regular warfare in the country. In order to aid individuals in recovering from ailments and injuries, Eisai prescribed tea as an antidote for fatigue, lupus, beriberi, indigestion and other health issues. Eisai's Kissa Yojoki also gives descriptions on the tea plant, its leaves and flowers and how to process tea leaves.

A more colorful example of Eisai's use of tea as a medicinal beverage features into one of his encounters with the shogun Sanetomo. In this encounter recorded in a historical text, the shogun was ailing from a hangover after drinking too much wine the previous evening. In order to help to treat the shogun's hangover, Eisai prepared a bowl of tea for the shogun and a copy of his treatise on tea and its many health benefits.

The shogun was pleased by this gesture and it helped to further the status of Eisai, tea, and Zen. This interaction also demonstrates the growing relationship between Eisai, Zen Buddhism, and tea with the growing samurai class who would later incorporate tea and tea ceremonies into their lifestyles on and off the battlefield.

Eisai's book on tea did not only influence the warrior class but also wider Japanese society as a whole. Prior to Eisai's work, tea was an expensive commodity that could only feasibly be enjoyed by the aristocracy and the clergy of the time. But after Eisai's writings, tea became a beverage consumed by all strata of Japanese society.

Today, Eisai is regarded as the Father of Japanese Tea Culture and it is believed that the tea fields that currently grow in Uji, Japan are the descendants of some of the first tea plants that Eisai brought from China and gave to another monk who planted the seeds in Uji.