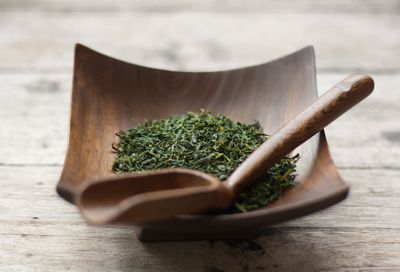 Korean tea was originally introduced by Buddhist monks and significant influenced by both, Chinese and Japanese tea. In Korea is beside tea made of Camellia sinensis also herbal tea or tisane popular. Both are considered as Korean tea.

Tea (Camellia sinensis) was introduced in Korea during the Shilla Dynasty (668-935). The earliest kinds used were pu-erh and black tea. Later, around AD 828 tea plants or seeds where brought by Buddhist monks to Korea.

During Koryo Dynasty (918-1392) and with the rise of Buddhism also the Korean tea culture prospered. Drinking tea was common on the court and among aristocrats. Tea houses and shops where widely available. When Confucianism became popular during Chosun Dynasty (1392-1910) the tea culture declined and where only maintained by a small group of Buddhist monks.

Since 1980 tea culture and tea industry experiences a revival. Nowadays, tea in Korea is produces on a highly industrialized, to Japan comparable scale.

Korean green tea is steamed and roasted (except Jeoncha). This why taste and aroma are somewhere between Japanese and Chinese green tea.