Difference between revisions of "Tteokcha" 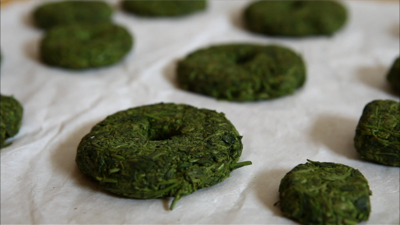 Tea bricks, or cakes, were introduced to Korean from China during the third century BCE. The name byeongcha is the Korean pronunciation of this variety of tea's Chinese name, bingcha.

Tea bricks came to be called tteokcha as well due to the round, flattened shape the bricks may take which resemble rice cake. Other alternative names include jeon-cha (전차/전다/"coin tea") meaning coin tea because the round, flattened bricks would have a hole in the center where they would be carried or stored on a string like traditional coins.

The South Jeolla Province and region around Korea’s mount Jiri preserved the tradition of preparing bricks of fermented tea while most other tea production in Korea is devoted to loose-leaf green tea production.

Borimcha was developed during the late Joseon period in Korea during the 1800s. It was developed by Jeong Yak-Yong, a scholar and philosopher, and Choi Sun-sa, a priest credited as being the best tea maker of the era. The tea was produced by steaming, drying, and then crushing tea leaves from the ujeon (first pluck of tea leaves from the “grain rain” on April 20th) or the gogu (second pluck after April 20th). The powder is then mixed with safflower, shaped into their round shapes, and then lightly roasted before being added to hot water. Some variations include ginger and other sweeteners.

The color of the tea is often a deep amber color, with a flavor that is said to be fruity with some slight spiciness and woodiness. Like similar teas such as China’s pu’erh, tteokcha is said to give the body a feeling of lightness.