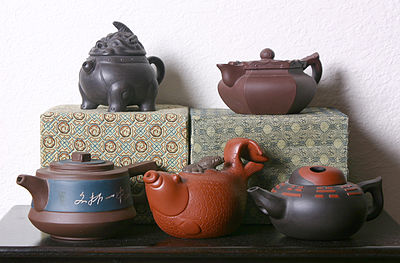 Five Yixing clay teapots - showing a variety of styles from formal to whimsical.

Yixing clay (zh|s=宜兴|t=宜興) is a type of clay from the region near the city of Yixing in Jiangsu province, China. Its use dates back to the Song Dynasty (960 - 1279) when Yixing clay was first mined around Lake Taihu in China. From the 17th century on, the Yixing wares were commonly exported to Europe. The finished stoneware, which is used for teaware and other small items, are usually red or brown in color. They are known as Zisha ware, and are typically unglazed. The clays used for the Yixing wares are very cohesive and can be formed by slip molding, coil forming, or most commonly, slab forming. The clays can also be formed by throwing. The most famous wares made from yixing clay are Yixing clay teapots .

The term "yixing clay" is often used as an umbrella term to describe several distinct types of clay used to make stoneware:

The raw materials for yixing clay are buried deep underground, sometimes under heavy sedimentary rock formations. When excavated, it is usually located within stratified layers of other clays. The seam of yixing zisha can be as thick as a several decimeters, up to a meter. Yixing clays consist of fine iron-containing silt, with mica, kaolinite and varying quantities of quartz and iron ores as its main mineral constituents.

Processing of raw zisha yixing clay involves removing the clay from the underlying strata, drying it under the sun in open stalls, and then pulverizing the dried clay pieces into fine particles. The clay powder then undergoes air screening to isolate clay particles of the finest grit size. The screened clay is then mixed with water in a cement mixer to a thick paste, piled into heaps, and vacuum processed to remove air bubbles, in addition to some moisture from the clay mixture. The quality and quantity of water in yixing clay is critical in that it determines the quality of the stoneware products produced. After this processing, the resulting clay is then ready to be used.

The appearance of yixing products, such as its colour or texture, can be enriched and altered through the addition of various metal oxides into the yixing clay, through the manipulation of firing temperatures, and also from regulating the kiln atmosphere (oxidative versus reductive).

Yixing teawares are prized because their unglazed surfaces absorb traces of the beverage, creating a more complex flavour. For these reasons, yixing teawares should never be washed using detergents, but rather with water only, and connoisseurs recommend using each tea vessel for one kind of tea (white, green, oolong, or black) or sometimes even one variety of tea only.

Early pots were designed for travel use hence you will see the simple classical look of the pots produced during the Ming Dynasty. Most tea drinking enthusiast will have one teapot for travel use, these tend to be less expensive and compact in design. It was not until during the mid-Qing Dynasty (18th century) that tea connoisseurs started to use the pot at home and the artisan begin to form them into different shape and sizes. Many exotic forms were conceived. Vessels were decorated with poetic inscriptions, calligraphy, paintings and seals were incised onto the surface of the teapots.