Matcha, also spelled maccha, refers to finely milled green tea. The Japanese tea ceremony centers on the preparation, serving, and drinking of matcha. In modern times, matcha has also come to be used to flavour and dye foods such as mochi and soba noodles, green tea ice cream and a variety of wagashi (Japanese confectionery). Matcha is a fine ground, powdered, high quality green tea and not the same as tea powder or green tea powder.

Blends of matcha are given poetic names called chamei ("tea names") either by the producing plantation, shop or creator of the blend, or by the grand master of a particular tea tradition. When a blend is named by the grand master of some tea ceremony lineage, it becomes known as the master's konomi, or favoured blend.

In Tang Dynasty, China (618–907), tea leaves were steamed and formed into tea bricks for storage and trade. The tea was prepared by roasting and pulverizing the tea, and decocting the resulting tea powder in hot water, adding salt. In the Song Dynasty (960–1279), the method of making powdered tea from steam-prepared dried tea leaves, and preparing the beverage by whipping the tea powder and hot water together in a bowl became popular. Preparation and consumption of powdered tea was formed into a ritual by Zen (Chan) Buddhists. The earliest Chan monastic code in existence, entitled Chanyuan qinggui (禪苑清規, Rules of Purity for the Chan Monastery, 1103), describes in detail the etiquette for tea ceremonies. 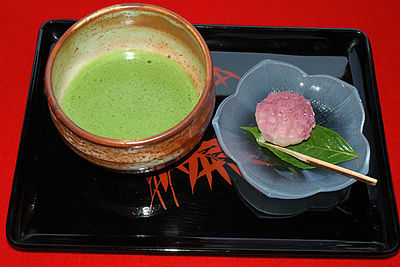 A chawan of matcha with traditional sweet

Chan Buddhism and the Chinese methods of preparing powdered tea were brought to Japan in 1191 by the monk Eisai. Powdered tea is no longer popular in China, but in Japan it continued to be an important item at Zen monasteries, and became highly appreciated by others in the upper echelons of society during the 14th through 16th centuries.

Matcha is made from shade-grown tea leaves also used to make gyokuro. The preparation of matcha starts several weeks before harvest up to 20 days, when the tea bushes are covered to prevent direct sunlight. This slows down growth, turns the leaves a darker shade of green and causes the production of amino acids. Only the finest tea buds are hand picked. After harvesting, if the leaves are rolled out before drying as usual, the result will be gyokuro (jade dew) tea. However, if the leaves are laid out flat to dry, they will crumble somewhat and become known as tencha. Tencha can then be de-veined, de-stemmed, and stone ground to the fine, bright green, talc-like powder known as matcha.

Note that only ground tencha qualifies as matcha, and other powdered green teas, such as powdered sencha, are known as konacha, lit. "powder tea").

The flavour of matcha is dominated by its amino acids. The highest grades of matcha have more intense sweetness and deeper flavour than the standard or coarser grades of tea harvested later in the year.

Tencha leaves are traditionally dried outside in the shade and are never exposed to direct sunlight. However drying has mostly moved indoors. Quality matcha is vibrantly green also as a result of this treatment.

Without the right equipment and technique, matcha can become "burnt" and suffer degraded quality. Typically in Japan matcha is stone ground to a fine powder through the use of specially designed granite stone mills.

Oxidation is also a factor in determining grade. Matcha exposed to oxygen can easily become compromised. Oxidized matcha has a distinctive hay-like smell and a dull brownish green colour. 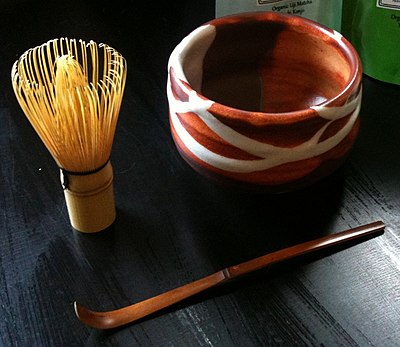 A three-piece set for making matcha, including a whisk (chasen), bowl (chawan) and spoon (chashaku)

There are two main ways of preparing matcha: koicha and usucha.

Prior to use, the matcha is often forced through a sieve in order to break up clumps. There are special sieves available for this purpose, which are usually stainless steel and combine a fine wire mesh sieve and a temporary storage container. A special wooden spatula is used to force the tea through the sieve, or a small, smooth stone may be placed on top of the sieve and the device shaken gently.

If the sieved matcha is to be served at a Japanese tea ceremony it will then be placed into a small tea caddy known as a chaki. Otherwise, it can be scooped directly from the sieve into a Chawan.

A small amount of matcha is placed into the bowl, traditionally using a bamboo scoop called a chashaku, then a modicum of hot (not boiling: 70–85°C water is added. The mixture is then whisked to a uniform consistency, using a bamboo whisk known as a chasen. There must be no lumps left in the liquid, and no ground tea should remain on the sides of the bowl. Because matcha can be bitter, it is traditionally served with a small wagashi sweet (intended to be consumed before drinking), and without added milk or sugar. It is usually considered that 40 g of matcha will provide for 20 bowls of usucha or 10 bowls of koicha.

Usucha, or thin tea, is prepared with approximately 1.75 grams (amounting to 1.5 heaping chashaku scoop, or about half a teaspoon) of matcha and approximately 75 ml (2.5 oz) of hot water per serving, which can be whisked to produce froth or not, according to the drinker's preference (or to the traditions of the particular school of tea). Usucha creates a lighter and slightly more bitter tea.

Koicha, or thick tea, requires significantly more matcha (usually about doubling the powder and halving the water): approximately 3.75 grams (amounting to 3 heaping chashaku scoops, or about one teaspoon) of matcha and approximately 40 ml (1.3 oz) of hot water per serving, or as many as six teaspoons to 3/4 cup of water. Because the resulting mixture is significantly thicker (about like liquid honey), blending it requires a slower, stirring motion which does not produce foam. Koicha is normally made with more expensive matcha from older tea trees (exceeding thirty years) and thus actually produces a milder and sweeter tea than usucha; it is served almost exclusively as part of Japanese tea ceremonies.

It is used in castella, manjū, and monaka; as a topping for kakigori; mixed with milk and sugar as a drink; and mixed with salt and used to flavour tempura in a mixture known as matcha-jio. It is also used as flavouring in many Western-style chocolates, candy, and desserts, such as cakes and pastries (including Swiss rolls and cheesecake), cookies, pudding, mousse, and [reen tea ice cream. The Japanese snack Pocky has a matcha-flavoured version. Matcha may also be mixed into other forms of tea. For example it is added to genmaicha to form what is called matcha-iri genmaicha (literally roasted brown rice and green tea with added matcha).

The use of matcha in modern drinks has also spread to North American cafés, such as Starbucks which introduced "Green Tea Lattes" and other matcha flavored drinks after matcha became successful in their Japan store locations. As in Japan, it has become integrated into lattes, iced drinks, milkshakes, and smoothies. A number of cafes have introduced lattes and iced drinks using matcha powder. It has also been incorporated into alcoholic beverages such as liqueurs.

The equipment required for the making of matcha are:

(also called tea scoop) a bamboo spoon to measure the powder tea into the tea bowl. Not the same as a Western teaspoon.

container for the matcha powder tea