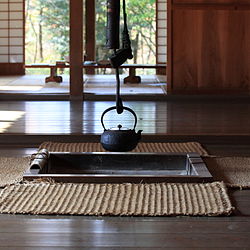 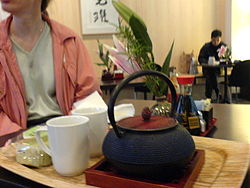 It is not clear when the first tetsubin pots appeared in Japan, but a hypothesis is that the popularity of the tetsubin pot grew alongside sencha, a form a leaf tea. China introduced Japan to sencha around the middle of the 17th century. Sencha was not considered as formal as matcha, the common powdered green tea at the time. Throughout the 18th century, people started drinking sencha as an informal setting for sharing a cup of tea with friends or family. As more people drank sencha, the popularity of the tetsubin grew. The tetsubin pot is most probably not an original design, but rather shaped by other pots around at the time. The five closest relatives to the tetsubin are the tedorikama, the toyama, the mizusosogi, the dobin, and the yakkan. The yakkan is the closest relative to the tetsubin, the main difference is that the yakkan is made from copper, whereas tetsubins are traditionally made out of iron. Some people have wondered why the tetsubin was developed, when a perfectly usable vessel such as the yakkan would have worked. Tea drinkers may have preferred the taste of water from an iron pot over the taste of water from a copper pot, which was what the yakkan was primarily made of. Throughout the 18th century, tetsubin kettles became a standard household utensil for heating water to make tea with. As the use of these pots increased, so too did the intricacy. During the 19th century, tetsubin designs went from simple basic iron kettles, to elaborately engraved masterpieces.