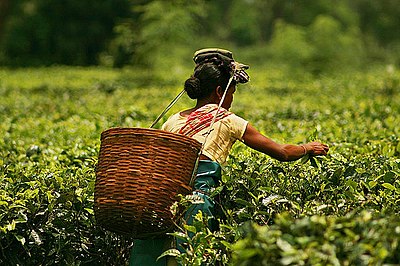 A teaworker plucking tea leaves in a tea garden of Assam

Assam tea (অসম, आसाम, and also असम) is a black tea named after the region of its production, Assam, in India. Assam tea (অসমীয়া চাহ, असमिया चाय) is manufactured from the Camellia sinensis var. assamica. This tea, most of which is grown at or near sea level, is known for its body, briskness, malty flavor, and strong, bright color. Assam teas, or blends containing Assam, are often sold as "breakfast" teas. Irish breakfast tea for instance, is a maltier and stronger blend among the breakfast blends.

The state of Assam is the world's largest tea-growing region, lying on either side of the Brahmaputra River, and bordering Bangladesh and Burma (Myanmar). The Assam tea plants are grown in the lowlands of Assam, unlike Darjeeling and Nilgiri tea, which are grown in the highlands. The Assam lowland region is located in the valley of the Brahmaputra River, an area of clay soil rich in nutrients of the floodplain. This part of India experiences high precipitation; during the monsoon period, as much as 10 to 12 inches (250–300 mm) of rain per day. The daytime temperature rises to about 103F (40 °C), creating greenhouse-like conditions of extreme humidity and heat. This tropical climate contributes to Assam's unique malty taste, a feature for which this tea is well known.

Though Assam generally denotes the distinctive black teas from Assam, the region produces smaller quantities of green and white teas as well with their own distinctive characteristics.

Historically, Assam has been the second commercial tea production region after southern China. Both are the only regions in the world with native tea plants.

Introduction to the West

This 1850 engraving shows the different stages in the process of making tea in Assam. 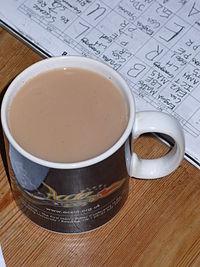 A cup of Assam milk tea.

The recurring colonial myth of "discovery" informs the history of the Assam tea bush and is attributed to one Robert Bruce, a Scottish adventurer, who apparently encountered it in the year 1823. Bruce reportedly found the plant growing "wild" in Assam while trading in the region. Maniram Dewan directed him to the local Singpho chief Bessa Gam. Bruce noticed local tribesmen (the Singhpos) brewing tea from the leaves of the bush and arranged with the tribal chiefs to provide him with samples of the leaves and seeds, which he planned to have scientifically examined. Robert Bruce died shortly thereafter, without having seen the plant properly classified. It was not until the early 1830s that Robert’s brother, Charles, arranged for a few leaves from the Assam tea bush to be sent to the botanical gardens in Calcutta for proper examination. There, the plant was finally identified as a variety of Camellia sinensis, but different from the Chinese version (Camellia sinensis var. sinensis).

Sales in the United Kingdom 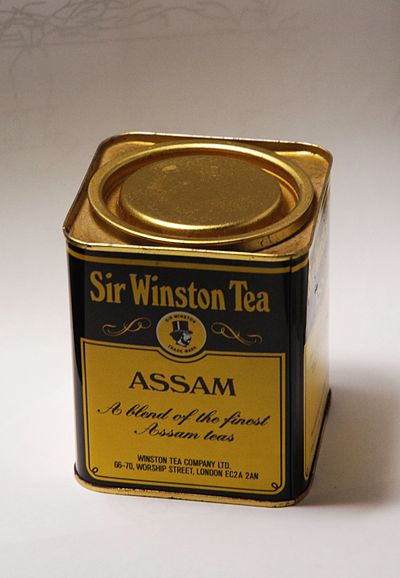 A box of Assam tea

The intervention of the English East India Committee was released through a body of 'experts' constituting the Tea Committee (1834) to assess the scientific nature and commercial potential of Assam tea. The adherence of the members of the committee to the Chinese ideal (in terms of the plant and the method of manufacture) led to the importation of Chinese tea makers and Chinese tea seeds to displace the "wild" plant and methods obtained in Assam. After a period, however, a hybridized version of the Chinese and Assam tea plants proved to be more successful in the Assam climate and terrain.

By the late 1830s, a market for Assam tea was being assessed in London; and the positive feedback led the East India Company to inaugurate a long drawn process of dispossession of agricultural land and forest commons through the infamous 'Wasteland Acts' allowing significant portions of the province by private capital to be transformed into tea plantations. The close symbiotic relationship of the colonial state and plantation capitalism through the colonial period is most succinctly captured in the term Planter-Raj.

The cultivation and production of Assam tea in the first two decades (1840–1860) were monopolised by the Assam Company, which operated in districts of Upper Assam and through the labour of the local Kachari labour. The success of the company and the changes in colonial policy of offering land to the tea planters (Fee simple rules) led to a period of boom and expansion in the Assam tea industry in the early 1860s, but these could not necessarily be translated into a dramatic shift in production (from China to Assam) due to the "makeshift" nature of plantations, poor conditions of life on plantation (huge rates of mortality and desertion), and also at times the presence of pure speculative capital with no interest in tea production.

A tea garden of Assam

The tea plant is grown in the lowlands of Assam, unlike Darjeeling tea and Nilgiri tea, which are grown in the highlands. The Assam tea bush grows in a lowland region, in the valley of the Brahmaputra River, an area of clay soil rich in the nutrients of the floodplain. The climate varies between a cool, arid winter and a hot, humid rainy season—conditions ideal for growing tea. Because of its lengthy growing season and generous rainfall, Assam is one of the most prolific tea-producing regions in the world. Each year, the tea estates of Assam collectively yield approximately 1.5 million pounds (680,400 kg) of tea.

Assam tea is generally harvested twice, in a “first flush” and a “second flush.” The first flush is picked during late March. The second flush, harvested later, is the more prized “tippy tea,” named thus for the gold tips that appear on the leaves. This second flush, tippy tea, is sweeter and more full-bodied and is generally considered superior to the first flush tea. The leaves of the Assam tea bush are dark green and glossy and fairly wide compared to those of the Chinese tea plant. The bush produces delicate white blossoms.