Black tea is a type of tea that is more oxidized than oolong, green and white teas. All four types are made from leaves of the shrub (or small tree) Camellia sinensis. Black tea is generally stronger in flavor than the less oxidized teas. Two principal varieties of the species are used – the small-leaved Chinese variety plant (C. sinensis subsp. sinensis), used for most other types of teas, and the large-leaved Assamese plant (C. sinensis subsp. assamica), which was traditionally mainly used for black tea, although in recent years some green and white have been produced.

In Chinese languages and the languages of neighboring countries, black tea is known as "red tea" (紅茶], Mandarin Chinese hóngchá; Japanese kōcha; 홍차, Korean hongcha), a description of the colour of the liquid; the Western term "black tea" refers to the colour of the oxidized leaves. In Chinese, "black tea" is a commonly-used classification for post-fermented teas, such as Pu-erh tea; outside of China and its neighbouring countries, "red tea" more commonly refers to rooibos, a South African tisane.

While green tea usually loses its flavor within a year, black tea retains its flavour for several years. For this reason, it has long been an article of trade, and compressed bricks of black tea even served as a form of de facto currency in Mongolia, Tibet and Siberia into the 19th century. Although green tea has recently seen a revival due to its purported health benefits, black tea still accounts for over ninety percent of all tea sold in the West.

Generally, unblended black teas are named after the region in which they are produced. Often, different regions are known for producing teas with characteristic flavors.

Black tea is often blended and mixed with various other plants in order to obtain a beverage.

In the United States, citrus fruits such as orange or lemon, or their respective rinds, are often used to create flavored black teas, sometimes in conjunction with spices (such as cinnamon). These products can be easily confused with citrus-based herbal teas, but the herbal products will generally be labelled as having no caffeine; whereas, the tea-based products do contain caffeine.

The tea is then ready for packaging. 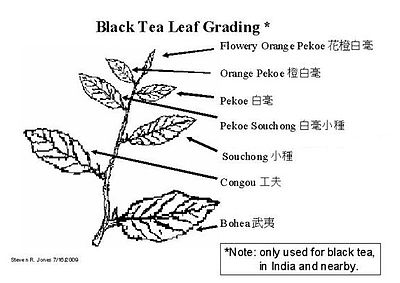 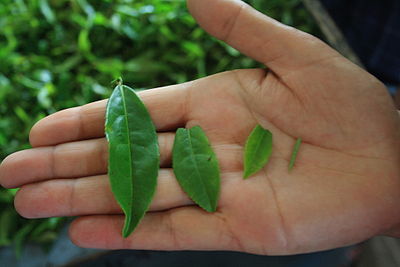 Black tea is usually graded on one of four scales of quality. Whole leaf teas are highest quality followed by broken leaves, fannings, and dusts. Whole leaf teas are produced with little or no alteration to the tea leaf. This results in a finished product with a coarser texture than that of bagged teas. Whole leaf teas are widely considered the most valuable, especially if they contain leaf tips. Broken leaves are commonly sold as medium grade loose teas. Smaller broken varieties may be included in tea bags. Fannings are usually small particles of tea left over from the production of larger tea varieties, but are occasionally manufactured specifically for use in bagged teas. Dusts are the finest particles of tea left over from production of the above varieties, and are often used for tea bags with very fast, very harsh brews. Fannings and dust are useful in bagged teas because the greater surface area of the many particles allows for a fast, complete diffusion of the tea into the water. Fannings and dusts usually have a darker colour, lack of sweetness, and stronger flavor when brewed.

Generally, 2.25 grams of tea per 180 ml of water, or about a teaspoon of black tea per 6 oz. cup, should be used. Unlike green teas, which turn bitter when brewed at higher temperatures, black tea should be steeped in freshly boiled water. The more delicate black teas, such as Darjeeling, should be steeped for 3 to 4 minutes. The same holds for broken leaf teas, which have more surface area and need less brewing time than whole leaves. Whole leaf black teas, and black teas that will be served with milk or lemon, should be steeped 4 to 5 minutes. Longer steeping times make the tea bitter (at this point, in the UK it is referred to as being "stewed"). When the tea has brewed long enough to suit the tastes of the drinker, it should be strained while serving.

The ISO Standard 3103 defines how to brew tea for tasting.

The biggest producers of black tea in the world (with % value) are:

Plain black tea without sweeteners or additives contains negligible quantities of calories, protein, sodium, and fat. Some flavored tea with different herbs added may have less than 1 gram of carbohydrates. All teas from the camellia tea plant are rich in polyphenols, which are a type of antioxidant.