Difference between revisions of "Masala chai" 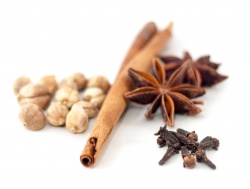 Masala chai (Hindi: मसाला चाय, literally "mixed-spice tea") is a flavored tea made by brewing black tea with a mixture of aromatic Indian spices and herbs. Originating in South Asia, the beverage has gained worldwide popularity, becoming a feature in many coffee and tea houses. Although traditionally prepared by decoction, retail versions include tea bags for infusion, instant powdered mixtures, and concentrates.

In many Eurasian languages, chai or cha is the word for tea. This comes from the Persian چای chay. Despite this, in many Western languages this spiced tea is commonly referred to as simply chai, which can lead to conflation. For this reason, the term chai tea, although redundant (as all masala chai is tea), is sometimes used to indicate spiced milk tea as distinct from other types of tea.

Numerous coffee houses use the term chai latte or chai tea latte for their version to indicate that the steamed milk of a normal latte is being flavored with a spiced tea concentrate instead of with espresso. By 1994 the term had become commonplace.

The beverage is locally known as Chai karak in the Middle East.

Tea plants have grown wild in the Assam region since antiquity, but historically South Asians viewed tea as an herbal medicine rather than as a recreational beverage. Some of the chai masala spice mixtures, or Karha, that are still in current use are derived from Ayurvedic medical texts.

In the 1830s, the British East India Company became concerned about the Chinese monopoly on tea, which constituted most of its trade and supported the enormous consumption of tea in Great Britain: approximately one pound (by weight) per person per year. British colonists had recently noticed the existence of the Assamese tea plants, and began to cultivate tea plantations locally. In 1870, over 90% of the tea consumed in Great Britain was still of Chinese origin, but by 1900 this had dropped to 10%, largely replaced by tea grown in British India (50%) and British Ceylon (33%).

However, consumption of black tea within India remained low until an aggressive promotional campaign by the (British-owned) Indian Tea Association in the early 20th century, which encouraged factories, mines, and textile mills to provide tea breaks for their workers. It also supported many independent chai wallahs throughout the growing railway system.

The official promotion of tea was as served in the English mode, with small added amounts of milk and sugar. The Indian Tea Association initially disapproved of independent vendors' tendency to add spices and greatly increase the proportions of milk and sugar, thus reducing their usage (and thus purchase) of tea leaves per liquid volume. However, masala chai in its present form has now firmly established itself as a popular beverage, not just outlasting the British but spreading beyond South Asia to the rest of the world.

The simplest traditional method of preparing masala chai is through decoction, by actively simmering or boiling a mixture of milk and water with loose leaf tea, sweeteners, and whole spices. Indian markets all over the world sell various brands of "chai masala", (Hindi चाय मसाला chāy masālā, "tea spice") for this purpose, though many households blend their own. The solid tea and spice residues are strained off from masala chai before serving.

The method may vary according to taste or local custom: example, some households may combine all of the ingredients together at the start, bring the mixture to a boil, then immediately strain and serve; others may leave the mixture simmering for a longer amount of time, or begin by bringing the tea leaves to a boil and only add the spices toward the end (or vice-versa).

A common Maharashtran practice for preparation of one cup of chai is to first combine one half cup of water with one half cup of milk in a pot over heat. Sugar may be added at this point or after. Ginger is then grated into the mixture followed by adding a "tea masala". Although the ingredients may vary from region to region, "tea masala" typically consists of cardamom powder, cinnamon powder, ground cloves, ginger powder, and pepper powder. The mixture is brought to a boil and 1 teaspoon of loose black tea is added. The chai is immediately taken off the heat, covered, and allowed to sit for approximately 10 minutes to allow the black tea to infuse into the chai. The chai is then strained and served.

A man in Kolkata, India with a tray for serving nine glasses of chai

There is no fixed recipe or preparation method for masala chai and many families have their own versions of the tea. Most chai contains caffeine typically 1/3 that of coffee (if made with a black tea base). The tea leaves steep in the hot water long enough to extract intense flavor, ideally without releasing the bitter tannins. Because of the large range of possible variations, masala chai can be considered a class of tea rather than a specific kind. However, all masala chai has the following four basic components:

The base tea is usually a strong black tea such as Assam, so that the spices and sweeteners do not overpower it. Usually, a specific type of Assam is used called "mamri". Mamri tea is tea that has been cured in a special way that creates granules as opposed to "leaf" tea. It is inexpensive and the tea most often used in India. However, a wide variety of teas are used to make chai. Most chai in India is brewed with strong black tea, but Kashmiri chai is brewed with gunpowder tea.

Plain white sugar, Demerara sugar, other brown sugars, palm or coconut sugars, syrup, or honey is used. Jaggery is also used as a sweetener, mostly in rural parts of India. While some prefer unsweetened chai, some sugar enhances the flavor of the spices.

A large quantity of sugar may also be required to bring out the intricate flavors of some spices; some recipes use up to three tablespoons of sugar in 3½ cups of chai. Condensed milk can also be added as a dual-purpose sweetener and dairy addition. Sugar is typically added to suit the drinker.

Usually, whole milk is used for its richness. Generally, masala chai is made by mixing ¼ to ½ parts milk with water and heating the liquid to near-boiling (or even full boiling). As noted above, some people like to use condensed milk in their masala chai to double as the sweetener. For those who prefer to drink chai without milk, the portion is replaced with water or soya milk.

The traditional masala chai is a spiced beverage brewed with different proportions of warming spices. The spice mixture, called Karha, uses a base of ground ginger and green cardamom pods. Other spices are usually added to this base or karha. For example, most masala chai found on the street, in restaurants or in homes incorporates one or more of the following along with ginger and cardamom, namely: cinnamon, star anise and/or fennel seeds, black pepper, and cloves. In the Western world, using allspice, to either replace or complement the cinnamon and clove, is also common.

Traditionally, cardamom is a dominant note, supplemented by other spices such as cloves, ginger, or black pepper; the latter two add a heat to the flavor and the medicinal aspect of the drink. The traditional composition of spices often differs by climate and region in Southern and Southwestern Asia.

For example, in Western India, fennel and black pepper are expressly avoided. The Kashmiri version of chai is brewed with green tea instead of black tea and has a more subtle blend of flavorings: almonds, cardamom, cinnamon, cloves, and sometimes saffron. In Bhopal, typically, a pinch of salt is added.

Other possible ingredients include nutmeg, coriander, rose flavoring (where rose petals are boiled along with the loose-leaf tea), or liquorice root. A small amount of cumin, also considered a "warm" spice in Ayurveda and traditional Chinese (and European) medicine/cuisine, is also preferred by some people.

Its original form remains available in restaurants that serve South Asian cuisine, but outside those venues, many Westerners are just as likely to consume their "chai" as a slushy iced beverage resembling a milkshake as to drink it as hot spiced tea. Chai flavouring is also used in baked goods such as pumpkin pies, biscuits or butter tarts.

Liquid "chai concentrates" have become very popular for their convenience, as these spiced, sweetened tea-based syrups merely require dilution with milk, water, or both to create a flavorful hot or cold beverage. Most coffeehouse chains use commercial liquid concentrates instead of brewing their own chai from scratch. Dry powdered or granular mixes similar to instant coffee are also commercially available.

Both dry instant mixes and liquid concentrates can be replicated at home. A liquid concentrate can be made by brewing an unusually concentrated pot of highly spiced tea, so that the dilution of a small amount into a cup of hot water or a glass of cold milk results in roughly the same concentration of tea as in a normally proportioned brew; e.g., to make a syrup from which one ounce suffices to make one eight-ounce cup of normal chai when diluted, brew tea (and the proportional quantity of spices) at eight times normal concentration.

Similarly, unsweetened iced-tea powder can be tailored to individual taste with powdered spices, sugar, and (if desired for convenience and texture) dry nonfat milk and dry non-dairy creamer; the result can be mixed with hot water to produce a form of instant chai masala. This form of dry mix has certain disadvantages, however: the powdered spices may leave a grainy residue at the bottom of the cup, and it may dissolve poorly in cold water, especially in the presence of dry milk/creamer powders.

Many Western supermarkets now sell pre-packaged single-serving teabags of "chai". The packaged directions generally call for steeping the small bag of ground spices and tea leaves in a cup of hot water for several minutes longer than plain teabags, resulting in a beverage which is slightly stronger than the average teabag brew but still not as intense as traditional preparations.

Some American supermarkets also carry bottles of "chai spice" alongside their dried herbs and other spices. Unlike Indian spice mixtures, the American ones are generally made from powdered spices cinnamon tends to be the dominant flavor) and sometimes sugar; this mixture can be added at the last minute to an already-brewed cup of tea as there is no need to strain off the solids.

As an alternative to the hot tea format, several types of cold "chai" beverages have become popular in the United States. These range in complexity from a simple spiced iced tea without milk to a slush of spiced tea, ice, and milk (or non-dairy creamer) mixed in a blender and topped with whipped cream.

Many Western commercial preparations use non-traditional ingredients such as vanilla or chocolate, relegating the traditional masala spices to a relatively minor role.

During the Christmas season, a quick chai preparation can be made by combining plain tea with eggnog as a convenient pre-spiced, pre-sweetened dairy product.

Non-tea-based variants may be prepared with herbal tisanes such as rooibos, or with the South American beverage yerba mate.

Some coffeehouses in the United States offer a version of masala chai augmented with espresso, but this beverage does not have any one universally recognized name. Depending on the establishment, it may be called "java chai", "red eye chai", "chai charger", "tough guy chai", "dirty chai", or many other different names. However, despite the common use in many localities to use the term "latte" as an abbreviation of "caffe latte" ("cafe latte"), the term "chai latte" does not generally imply the presence of coffee in the beverage; see the spiced tea terminology above (literally, "latte" is Italian for "milk").